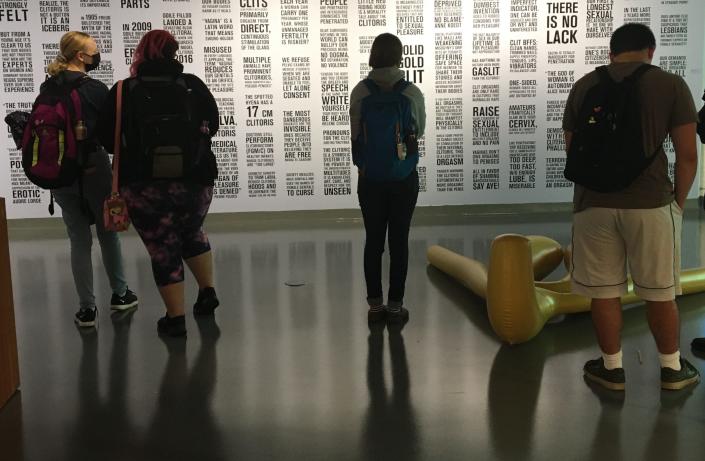 That blunt and provocative question is but a small part of “Cliteracy, 100 Natural Laws,” a site-specific, text-heavy installation by artist Sophia Wallace, exhibited at the UMass Dartmouth Campus Gallery.

With black vinyl lettering taking up an entire wall, “100 Natural Laws” displays 99 more questions, quotes, observations, facts, history lessons and bits of clever wordplay, and much of it will prove disquieting to some. It will certainly bristle the hairs on the napes of those that use “woke” as a dirty word.

Sample text #2: “AND THE WINNER IN THE CATEGORY OF DUMBEST INVENTION GOES TO RIBBED CONDOMS ‘FOR HER PLEASURE’”

Sample text #3: “NOT INTERESTED IN MUTUAL PLEASURE? KEEP IT SOLO”

And there are another 96.

Let’s get back to the first question, the one about drawing the clitoris. The answer for most is a resounding “NO,” even when that query is posed within the confines of a college gallery, filled with art students and instructors. Even those who have spent countless hours in life classes, drawing the nude in excruciating detail, would likely be stumped, and that is not without good reason.

In a 2017 article in The Atlantic, writer Naomi Russo noted, “The clitoris really isn’t that confusing. Or it shouldn’t be anyway. Nonetheless, acknowledging the shape, size or even existence of this essential body part has not always been par for the course — even in the medical profession.”

But can it be drawn? Yes, absolutely. Thanks to the anatomical research of Dr. Odile Buisson (and her colleagues) and the life-size 3-D printed models that followed, there is a clearer visualization of the organ. And frankly, with its elongated “legs’ and curves, it looks a bit like a cartoon alien (but so does a penis.)

Wallace has drawn the clitoris many times. She has painted it, stenciled, printed it, sculpted it, put it on t-shirts, and reimagined it as jewelry, neon lights, inflatable latex balloons, and elements of fabric patterns.

With “Cliteracy, 100 Natural Laws,” there is no doubt that there will be some that might be offended by the brutal realities Wallace exposes, be they social blunders, misogynist mythologies, self-serving outright lies or simple ignorance. That said, it is not difficult to be elated by the sheer joyfulness evident in depictions of the clitoris.

In the lobby, outside the interior gallery entrance, large inflatable clitorises — orange, yellow and indigo — hover above, dangling on cords from the ceiling. Another large pink one greets visitors as they come in through a ground level door.

Her “Swan Series” is a bit subdued, almost taking on a solemn note, as sixteen of her wonderfully rendered organic forms, made from slipcast glazed stoneware, sit on shelves in a triangle, exuding a sense of something close to holiness.

Wallace loves a good pun and her text work engages in myriad wordplay in celebration of the clitoris, including the name of the show itself. She credits Dr. Ian Kerner with coining the portmanteau word “cliteracy” in his 2004 book, “She Comes First: The Thinking Man’s Guide to Pleasuring a Woman.”  But it is Wallace that propelled the term into the zeitgeist.

For Wallace, the art of intimate justice clearly deals with equal sexual pleasure between partners, but that is just one method of strengthening bonds. When I spoke to her, she made a point about bringing the person you love a cup of tea “just the way they like it” or making sure the room is warm enough.

Wallace’s TED Talk,  “A Case for Cliteracy,” is readily available online. In addition, she will present a lecture, “The Future is Cliterate,” on Oct. 25 at 7 p.m. at the Grand Reading Room, Claire C. Carney Library, UMass Dartmouth.

Cliteracy is a hot button topic. The exhibition is exciting, demanding and of real significance. Do I need to make a pun?

“Cliteracy: The Art of Intimate Justice” is on exhibition at the CVPA Campus Gallery, UMass Dartmouth, 285 Old Westport Road, North Dartmouth, through Nov. 4.